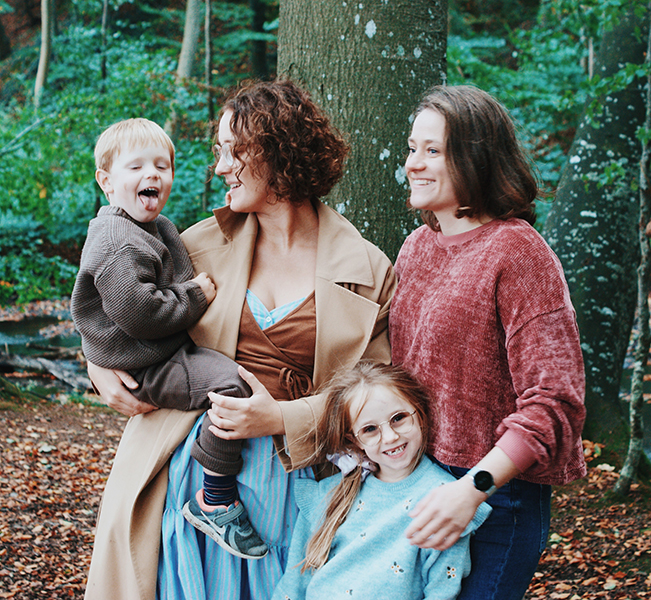 Meet Marie, a 29-year-old woman, living in Aarhus, Denmark. Marie has been married to Sara for 8 years and together they have two children, Benedikte who is 6 ½ and Vilfred who is 4 years old. Marie posts on her Instagram ‘Morogmor’ and in this blog post, she shares her story about her family, how they chose their donor and how they come together as a family.

“Because mother-Marie and mother-Sara so desperately wanted a family. A family where Marie is the mother, where Sara is the ‘mama’ and where we got a baby girl we could call Benedikte.” This is how Marie usually answers her daughter Benedikte’s question about why she has two mothers. Marie and Sara had only been together for two years when they started talking about starting a family. Because Sara is older than Marie, they should not wait too long to get started and this was also the reason why Sara should be pregnant first. It was an easy decision to get started and Sara got pregnant on the first try at a private clinic. Not long after that, the couple started getting pregnant with their son Vilfred who Marie carried.

“Everyone deserves a family”

Marie and Sara had to choose a donor in a short time. They chose an ID release donor because it felt most natural for the couple. “For us, it made the most sense to choose a solution where we don’t play the game that there is no semen,” Marie says and elaborates: “I am perfectly OK with showing my children that there is a man with some DNA involved and I can only offer that to my children by choosing a donor with a known identity.” The couple wanted to keep as many options as possible open to their children. “Questions may take up less space if you know that it is possible to get answers,” Marie explains about their philosophy.

In addition to donor status, where ID release is an option, their donor choice was an intuitive and pleasurable process. “We just sat at home in front of the computer and picked the ones who gave the best feeling,” she explains and continues: “We looked at the pictures of them as children and when we found a donor, who had chosen to be a donor because everyone deserves a family, we chose him.” For Marie and Sara, the donor’s reason and motivation gave them a good feeling. “Our donor’s motivation was just completely sober and kind-hearted and that’s why we chose him.” The couple thus ended up choosing the same donor for both of their children. The donor, who made them happiest. In this way, their donor ended up giving them a reassurance that they would get a little wonder child. Because yes, everyone deserves a family.

Parents become parents with each other

What really makes a family? In 2021, there are up to several different ways to be family. In the case of Marie and Sara, they make a virtue out of telling and showing their surroundings that it is not strange that their children do not have a father. “Parents become parents with each other, not with the donor,” Marie says and elaborates: “The parents are the ones who are in the child’s life. Parents are the ones who are there in everyday life and love them.” But that does not mean that Marie and Sara do not mention their donor. “We are very honest with the children,” she says and adds: “We have told them that you can find men at the doctor’s place, who want to help.” They have shown them videos on YouTube about how an egg and a sperm cell turn into a baby, and it has turned into really nice conversations: “We have talked to our children about getting help from the doctor to have children, if you do not have any sperm yourself, and we do not,” Marie explains.

The word “donor” and children’s logic

But how do they talk about the donor at Marie and Sara’s home? “We just say donor,” Marie tells us and elaborates: “It’s a really nice word and it’s not dangerous to use. We do not think that you should be intimidated by the reality you have put yourself in.” The family does not shy away from showing their children this ‘reality’ either. For example, they like to play with their children, where one of them acts as the “father”. “The children hear the word ‘father’ in the children games in the nursery and kindergarten, and it is only natural to want to try the concept,” Marie says. Marie and Sara like to play these games with their children, in the same way as they play other games at home. Or play football or cook together. For them, playing and curiosity are healthy things. According to Marie, it is the adults who overcomplicate things and we should all add more “children’s logic” to our lives: “Children’s logic is quite simple. The people we have in our lives – those are the ones we love. The people who are nice to us – we like them, and we remember them “, Marie says and elaborates:” Children are so immediate and we should all just do as children. It would be a simpler life if we also took the children’s logic to heart.” Marie and Sara actually find that the children find their family a little boring compared to other families where mom and dad are often divorced or have a different skin color. “We’re just lesbians,” Marie laughs. For the same reason, they do not use the words “lesbian” or “rainbow family” at home. Because they are no different than everyone else towards their children. They’re just parents.

A completely normal family with mom and mom

One thing is how children talk about their donor, another thing is how the outside world does. Marie and Sara’s children do not really experience it yet, but because children are so immediate, other children in kindergarten may well ask Marie when picking up Benedikte: “Where is Benedikte’s father?” Marie usually answers: “Benedikte does not have a father, she has a mother and a mama”, to which the reaction often is: “Aw, we only have a mother and a father,” Marie says and adds with a laugh: “So they get to borrow Sara, which means that she’s ‘mama’ to many.” The couple’s daughter Benedikte is thus also quick at answering for herself if she is rarely asked about her family: “She just says; “My parents fell in love with each other and then they got me.” She does not sense a ‘difference’, it is completely natural for her,” Marie explains. Sometimes there are some who think we are different, but then Marie explains her daughter that such was the view of some people in the old days, but that we are better today. Benedikte is a little girl with grit. She likes to run up to strangers and introduce her whole family. Her little brother is not there yet, and he does not have to deal with it yet. Sometimes he asks one of his parents “Are you my father?” and then they pretend play that either Marie or Sara is the father. For them, it is completely natural that “father” is part of their children games and upbringing, just as it is completely natural that Vilfred and Benedikte have a mother and a mama.

The donor is an ordinary human being

To the question of whether to choose a donor with ID release or not, Marie and Sara have chosen to leave the door open and allow their children to contact their donor when they turn 18 years old. “If it was me who was a donor child, I would probably at some point in my life wish to be able to make contact,” Marie explains and elaborates: “For example in my teens, or in my late 20s if I got pregnant, or in other situations where, for one reason or another, you are in the phase of reconsidering your life.” The couple is of the conviction that if you as a donor child are looking for some answers, a meeting with your donor can be a part of finding the missing puzzle piece. “But it is probably not in such a meeting, that you get clarity. But it can be a step in the right direction. For some, it is pure curiosity,” Marie says. In such a situation, she hopes that her children will make contact and find out that their donor is a completely ordinary human being and not an oracle with answers to life’s big questions. The answers must be found within oneself.

The world is going to revolve around you and adapt

In the journey to have children and become parents, whether in one way or another, Marie advises others to always follow your gut feeling and do what feels right for yourself. “We are such good parents that I am almost surprised at how little I really had to worry about,” she says and adds: “The most important thing is that we have healthy children. You do not have to worry about anything else. The world will revolve around you and adapt.” Although you have many unanswered questions and concerns before you either start trying to have children yourself or with your partner, there is one thing that is definite according to Marie and that is that the journey starts and ends with yourself: “You do you,” Marie concludes with a smile.

Thanks to Marie for joining this blog and sharing her amazing story with us. You can follow Marie at Mor & Mor on Instagram and her blog. Keep an eye out for her upcoming diversity coloring book for kids, posters and more here. 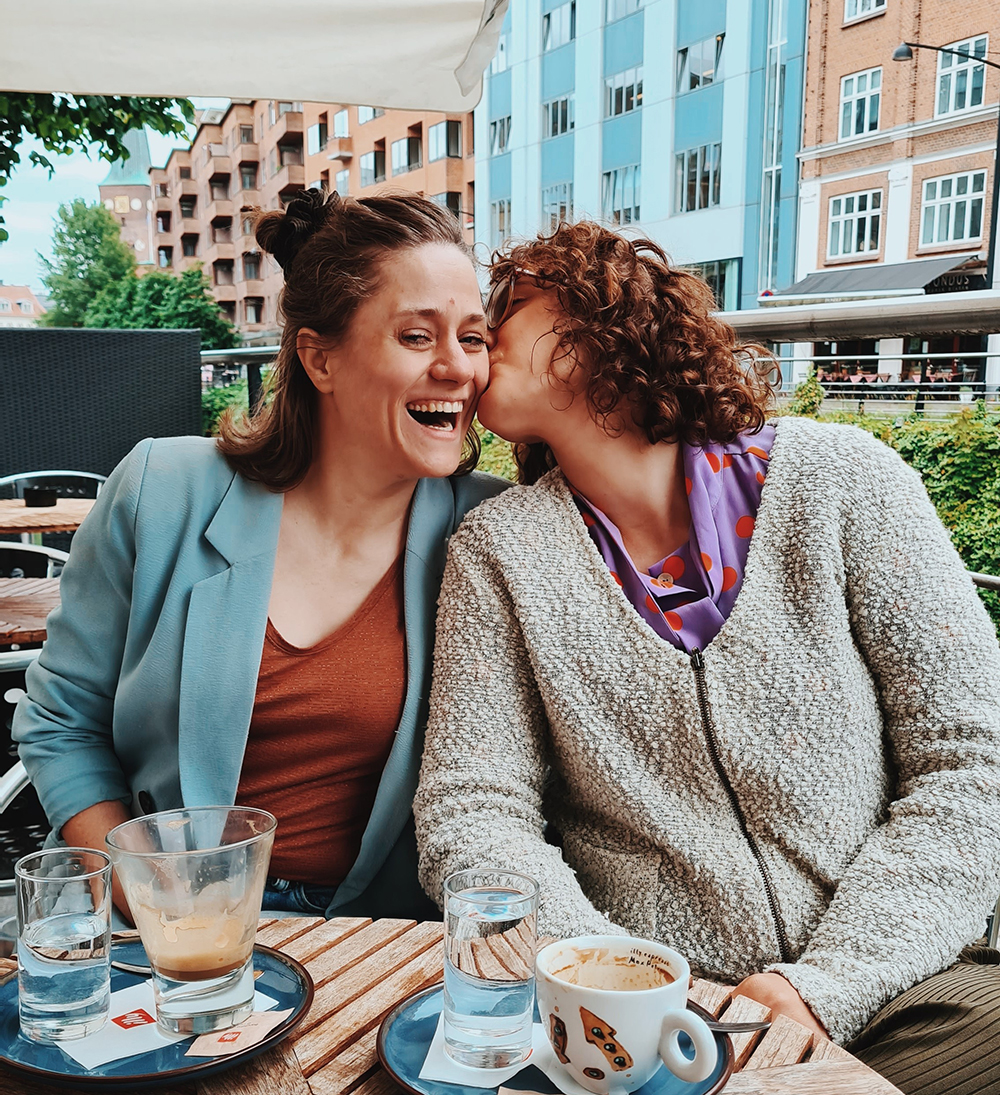